Ketosis vs. Fat-Adapted: What’s the Difference?

I see a TON of confusion on this topic so I wanted to take a moment to clarify the difference between being in Ketosis vs being Fat-Adapted.  They’re not the same!

When you restrict your carbohydrate count significantly, it forces your body’s stored glycogen levels – your body’s primary source of fuel – to drain.  Without any glycogen left to consume as fuel, your body begins to produce ketones for energy and this process is known as ketosis.

Generally, ketosis occurs after you restrict your body to <25 net carbs a day, although the exact net carb count varies by individual depending on activity level and other factors.  For example, athletes may be able to consume up to 50 net carbs daily and still remain in ketosis. For beginners, it can be extremely helpful to test your ketone levels to (a) confirm you’re actually in ketosis, and (b) get a better sense of your personal net carb threshold. Refer to How to Test Your Ketones for the best methods.

So then what does it mean to be fat-adapted?

When new dieters first convert to burning ketones for energy (which typically takes anywhere from 2-7 days of carb restriction), the energy burn isn’t as efficient as it could be.  During this transition, your body is still looking for glucose instead of ketones.  Your body hasn’t learned that fat is your primary fuel and while you’re creating ketones, you may not be producing enough to sustain you.   This is often the period when new keto dieters experience ‘keto-flu’ symptoms.   Refer to my post on How to Fight the Keto Flu for more details. 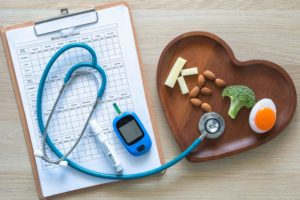 As you continue to restrict your carb intake over longer periods of time, your body will naturally adapt from running off glucose to running off ketones for energy until it becomes fully fat-adapted.  This occurs once your body is fully conditioned to burning fat as its primary fuel source.  Your body learns how to leverage ketones efficiently, and they become your preferred metabolic state for producing energy.  This typically takes anywhere from 4-12 weeks of Keto.

How will you know you’re fat-adapted?

You’ll know you’re fat-adapted when you start experiencing increased energy and are able to go much longer period of times without eating.  For anyone who gets ‘hangry’ after a a few hours without a meal, you’ll be pleasantly surprised when that’s no longer the case.  This is a telling sign that you are fat-adapted!

Before you go, don’t forget to check out my Recipes page for some easy & delicious Keto meals! 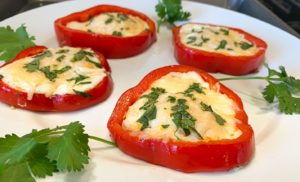 Or return to my Keto Beginner’s Guide here! 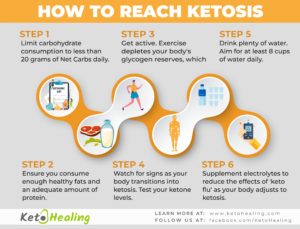 DON’T WANT TO MISS OUT ON MORE DELICIOUS KETO EATS?